Edna Waldron ~ The Starlet Killed In A Fire 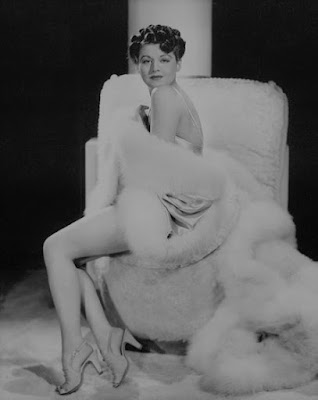 Edna Waldron was a beautiful young starlet who died in a tragic fire.

She was born on May 17, 1913 in Kansas City, Missouri. Edna attended Westport High School where she had the lead in a production of The Torchbearers. After winning a beauty contest she moved to Hollywood and was offered a contract with Hal Roach. In 1934 she was chosen out of three hundred actresses for a featured role in the musical The Merry Widow. She also appeared in the movies Reckless and Our Relations. Her shapely legs earned her the nickname "The Gam Girl". Unfortunately her career consisted mostly of bit parts. On May 22, 1935 she married actor Jimmy Aye, the brother of Maryon Aye. She spent the next several years being a housewife. 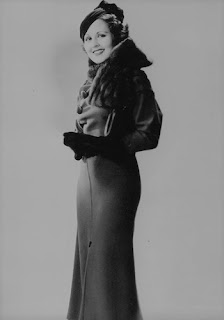 Edna and Jimmy were both injured in a car accident in 1937. The following year the couple divorced. They reconciled in 1940 when they worked together in the movie Brother Orchid. She and Jimmy were planning to remarry but tragedy struck. On August 18, 1940 Edna was at her home doing laundry when a fire broke out. Three year old Catherine Bowman's clothes caught on fire and Edna was severely burned trying to save the child. She suffered third degree burns over half her body. Sadly she died from her injuries on August 24 at the young age of twenty-seven. Edna was buried at Inglewood Park Cemetery in Los Angeles. 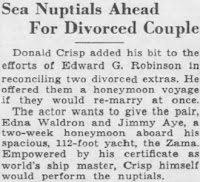 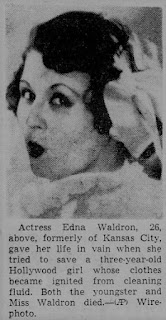 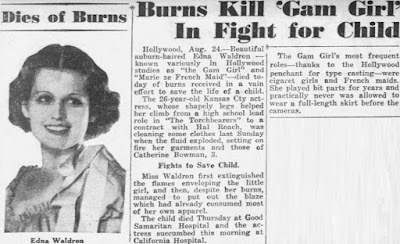