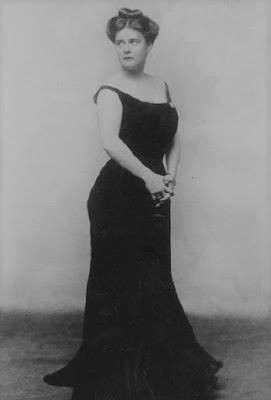 Elfie Fay was a popular vaudeville actress known as The Belle Of Avenue A.

She was born Elfie Virginia Fay on January 11, 1879 in New York City. Her father was vaudeville star Hugh Faye. She began performing on stage at the age of fifteen. Elfie made her Broadway debut in  February of 1900 starring in Mam'selle 'Awkins. Over the next few years she appeared in the hit shows The Belle Of New York and The Southerners. Her habit of ad-libbing and making odd facial expressions on stage made her a sensation. The vivacious red-head was nicknamed "The Belle Of Avenue A". She made headlines in 1902 when she got engaged to Sir Thomas Lipton, a wealthy British sportsman. Elfie was also engaged to Sir George Lionel Prescott, a British Lieutenant, and Ensign Leslie B. Anderson, a Naval officer. She said "A woman can fall in love as often as she encounters a man who is able by superior qualities of heart and mind to inspire such love." Elfie filed for bankruptcy in 1910 and spent the next several years performing in Europe and Asia. 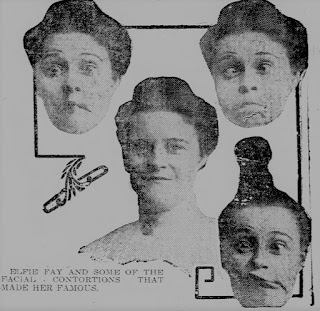 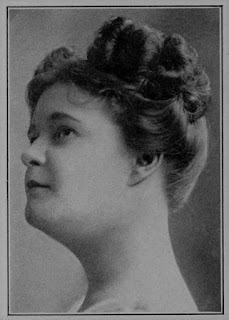 In 1913 she married Eugene Rosenblatt in England. They divorced three years later. She returned to New York City and started performing in vaudeville. Elfie married Samuel Armstrong Benner, a steel executive, on December 21, 1920. Tragically he died just three months after their wedding. Although her husband was wealthy she only inherited $500 from his estate. She moved to California to live with her brother, actor Hugh Fay. Elfie made her film debut in the 1924 comedy A Movie Mad Maid. She also had small parts in Trouble Chaser, His Day Off, and A Perfect Day. Elfie was devastated when her brother died in 1926. During the summer of 1927 she entered a sanitarium suffering from pulmonary tuberculosis. She died on September 16, 1927 at the age of forty-eight. Elfie was buried in an unmarked grave at Grand View Memorial Park in Glendale, California. 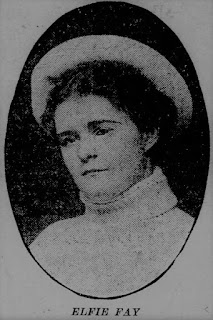 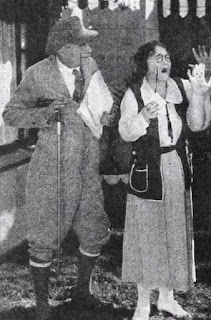 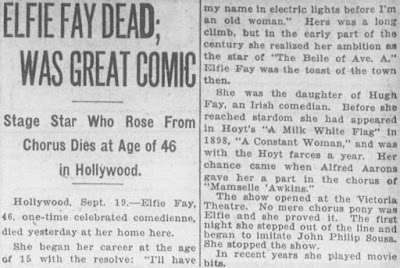