Jessie May Walsh was a 1920s starlet and the adopted sister of Delphine Walsh.

She was born in Texas in 1895 (some sources say 1888). Jessie May was the daughter of saloon owner J.J. Walsh and Beulah May Walsh. The family moved to Bisbee, Arizona when she was a child. She was educated at the Loretto Convent in Douglas. Her parents adopted a six year old girl named Delphine Doughtery. Jessie May and Delphine were both talented dancers and they performed in local productions. J.J. and Beulah took them to Hollywood so they could pursue theatrical careers. In 1914 Jessie May made her film debut in The Patchwork Girl Of Oz. She also appeared in the short The Cloak. Then she joined the Raymond Teal dance company. She was briefly under contract with the Laskey Studio. Jessie May went to San Francisco in 1919 to appear in the play For The Man She Loved.

That same year her father J.J. Walsh passed away. On August 14, 1922 she married businessman Edward Camp. She filed for divorce in January of 1924 claiming that he had pretended to be wealthy and sold moonshine whiskey. Jessie May continued to work as a dancer and actress. She married William Elmer Jones, a press agent, on January 28, 1929. Mildred Harris, ex-wife of Charlie Chaplin, was one of her bridesmaids. The couple spent their honeymoon in Honolulu. Tragedy struck in May of 1929 when her adopted sister Delphine Walsh died after undergoing an illegal abortion. The story created a major scandal in Hollywood. In 1933 Jessie May and William were divorced. Her mother Beulah died in 1956 at the age of eighty-three. 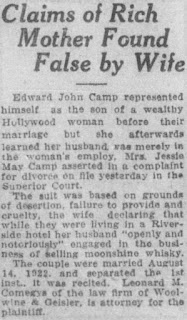