Suzanne Gumm was a singer who lived in the shadow of her superstar sister Judy Garland.

She was born Mary Jane Gumm was born on September 24, 1915 in Grand Rapids, Michigan. Suzanne had two younger sisters - Virginia and Frances. Their parents, Frank and Ethel Gumm, owned a local theater. Frank was gay and the couple had an unhappy marriage. In 1926 they were forced to move to Lancaster, California after Frank was accused of hitting on several boys. The three talented sisters formed a singing group called The Gumm Sisters. They toured the country and became a very popular vaudeville act. The Gumm Sisters made their film debut in the 1929 short The Big Revue. They also appeared in the shorts Bubbles and The Wedding Of Jack And Jill. Eventually the group changed their name to The Garland Sisters. Suzanne married orchestra leader Lee Kahn in August of 1935. Just a few months later her father died suddenly from a heart attack. Meanwhile her baby sister, now known as Judy Garland, was signed by MGM and quickly became a star. 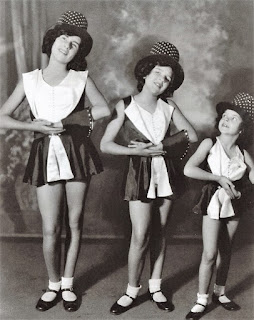 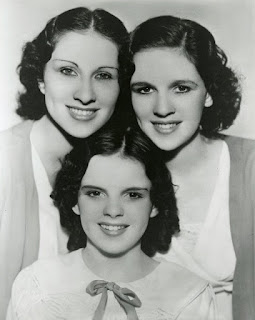 The Gumm Sisters - Suzanne (on the left), Virginia, and Frances 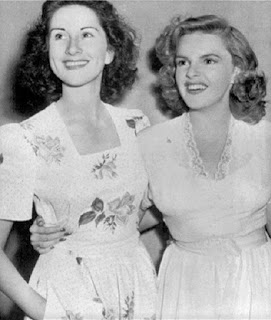 Suzanne occasionally performed with Lee's orchestra in Lake Tahoe. After getting some bad reviews she decided to quit singing. She had bit parts in Broadway Melody of 1940 and Babes On Broadway. Suzanne divorced Lee and married musician Jack Cathcart in 1941. She got a job in the mail room at MGM while Jack worked as Judy's musical conductor. The couple later moved to Las Vegas. Unfortunately she developed a serious drinking problem and became estranged from her famous sister. She was heartbroken when Jack divorced her for another woman in 1963. That same year she was hospitalized after overdosing on sleeping pills. Tragically on May 28, 1964 Suzanne died at the young age of forty-eight. There were rumors she had committed suicide but the truth was she died from asphyxiation caused by a seizure. Judy was unable to attend the funeral because she was too sick. Suzanne was buried at Forest Lawn Memorial Park in Glendale, California. 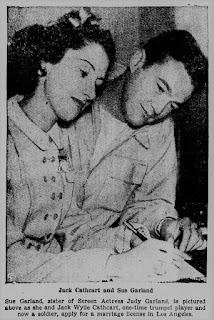 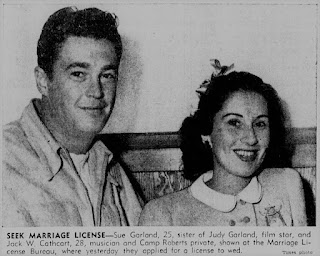 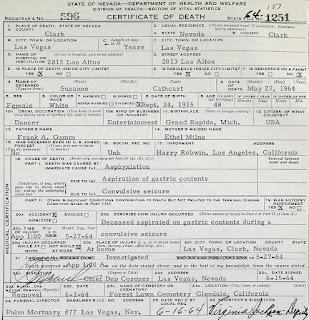